The first permanent settlers in Bluffdale were Jens and Rise Madsen. They homesteaded on the east side of the Jordan River in 1862. Chris Petersen and his family moved in with them the same year. Timothy Gilbert was the next to arrive and settled a short distance below them on the west side of the river. John and Robert Spencer arrived in 1868.


It was not until the canals were constructed that more settlers arrived. The canal system grew to include seven canals in Bluffdale In 1874 William Augustia Turner moved his family to the Jordan Narrows where he was employed as a watchman at the dams for the Salt Lake County canal system.


On December 14, 1883 the Salt Lake County Court created the Bluffdale Precinct. William Wallace Merrill was the first Justice of the Peace; Louis Petersen was the first constable. During the fall of 1888 a post office was established. William Wallace Merrill was the postmaster. When they petitioned the government for the post office, they couldn’t obtain one with the name of Bluffdale because there was already a post office in Bluff, Utah and it was determined that the name was too similar. They decided to name the town Mousley in honor of the first LDS Bishop in the area.


The town was growing and in 1887-88 the members of the LDS Church built a meeting house at 14400 South 1700 West. William Wallace Merrill and John Spencer donated the ground. The building cost $1200, which was all collected by donations. Men, women and children made adobe brick at the Crystal Hot Lakes by putting mud in frames to dry. Lumber needed for the church was hauled from Big Cottonwood Canyon by horse and wagon, a round trip could take almost a week. The meeting house had one big room with a pot-bellied stove in the center. It was used for Church, School and Socials.

Across the meeting house, there was a tithing house where butter, eggs or anything else that the people had were used to pay tithing. The building was also used as a home for a widow and class rooms when it was empty.


About 1876 the first train entered Bluffdale. It ran on the Narrow Gauge Railroad. It came around the Point of the Mountain. The train stopped in two places in Bluffdale (14400 S 2460 W and 15000 S. 2200 W). Although the tracks have been removed, some of the levies still stand.

One of the greatest tragedies experienced in Bluffdale was December 1, 1938. Snow was falling and there was poor visibility. Many students from Bluffdale caught the bus to go to school. The bus stopped at a railroad crossing around 11000 S 400 W and then pulled onto the train tracks and was immediately hit. The train's engineer did not see the school bus. The bus driver and 21 students were killed instantly. Twelve more were seriously hurt and nine escaped with minor injuries. Six of the students killed were from Bluffdale.


In 1957 the LDS Church deeded the cemetery to the City. In June of 1967 the old chapel was demolished and the new Chapel on 14400 and Redwood Road was dedicated.


In the late 1970s, Bluffdale faced a decision of merging with Riverton City or incorporating. In October 1978, Bluffdale officially became a city. This brief history of Bluffdale has been taken from two main sources. “Early Families of Bluffdale Utah” Compiled and Edited by Sheila Spencer, published by the Bluffdale Chapter Daughters of Utah Pioneers in 1996 and “Bluffdale One of a Kind” compiled by the Neilson Family in 1995. For a complete history, please contact these residents. 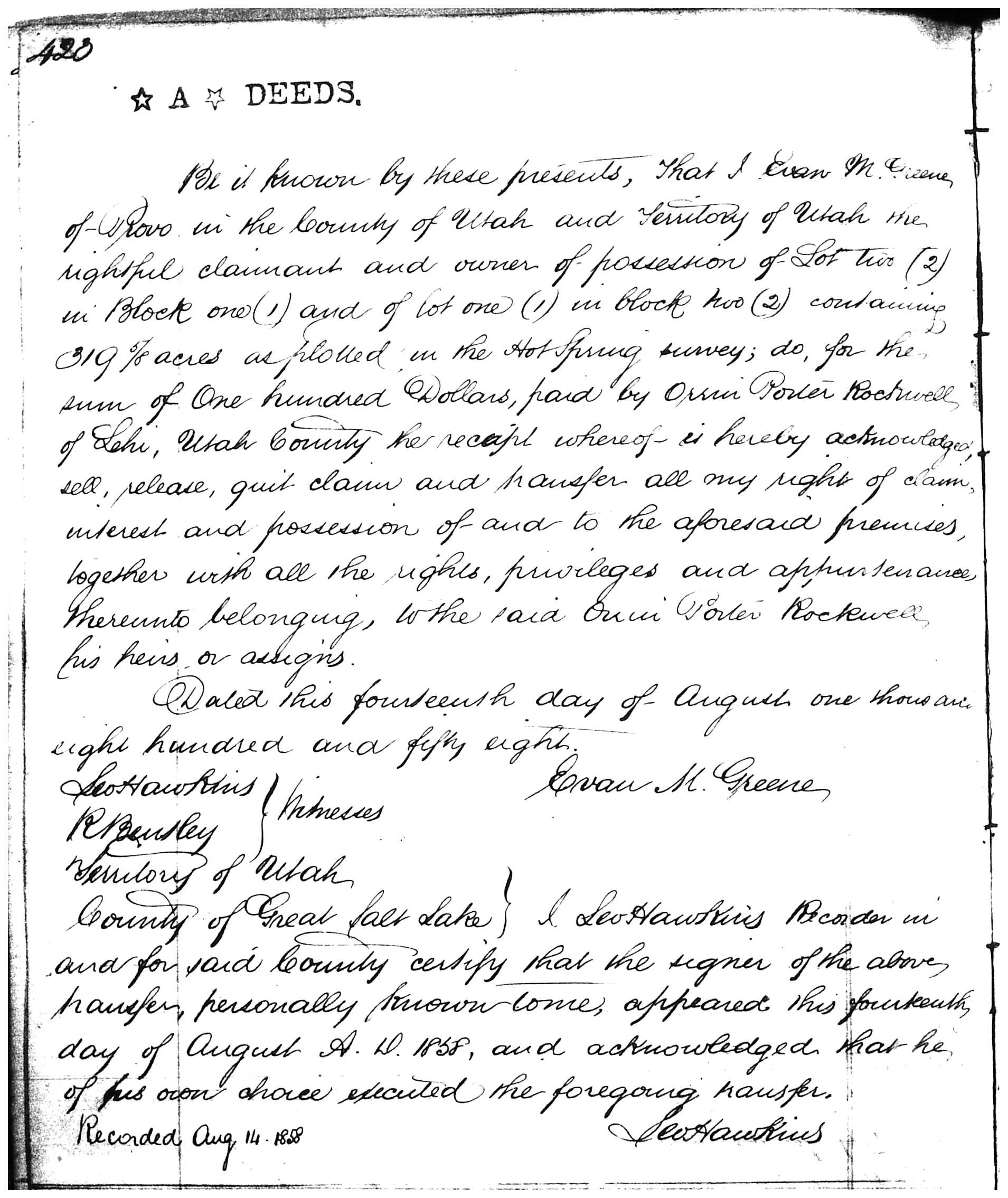