The Bluffdale Fire Department welcomes tours of the firehouses. Please call (801) 254-2200 ext. 442 to schedule a tour. Tours are subject to being interrupted due to emergency calls.

There are many wonderful people in the community that help out. John Roberts is one of these people. He meets all the requirements needed to be an ambassador. He does service and helps when someone doesn't even ask. He helps everyone in need and doesn't boast about it. John Roberts is a good man. He just doesn't help out, he is also the chief of the Bluffdale Fire Department. John shows his ability to help others by spending his time for the citizens of Bluffdale. When John has spare time he is doing his church calling. He will bring the scouts up to his cabin to go camping. The scouts get to sleep in the cabin and go fishing. He helps us by teaching the best way to gut a fish.

He helps out by cleaning up Bluffdale so we don't live in a pit. He has the firemen go pick up trash. After they pick up trash he lets them go. They have their own type of fun. They will take the fire trucks out and have an airsoft war. He make everyone smile around him. We had a slip-and-slide at the church and he brought foam. You would slide so fast that you went off the 200 feet slip-and-slide into the road.

He gives the young men and women jobs if they want. He will come and help you get your home ready for fire season for free. He wants everyone to be happy.

When my neighbor called because his neighbor was burning chemicals, he was the only one there. He got a gun to the head and did not fight back. He told the guy to put it out and he did not listen. He called in a cop and they helped with the problem. He actually saved the man's life because he almost fell into the fire.

He solves many problems with no stress and makes it look easy. When we were on our way to scout camp, our radiator in our truck was smoking. He came with water and helped us cool it down. When someone calls he does not delay. He gets there as fast as he can. When someone in Bluffdale called because of a fire, he was there in a minute flat. He could not even care about others, but he chooses to. He will cancel his appointments to come and help out.

He shows respect and does not use cruel words in hard times. He goes to every emergency call and is the first to be there. He drops anything he is doing to go and help others. John Roberts should get this award because of his willingness to help others. 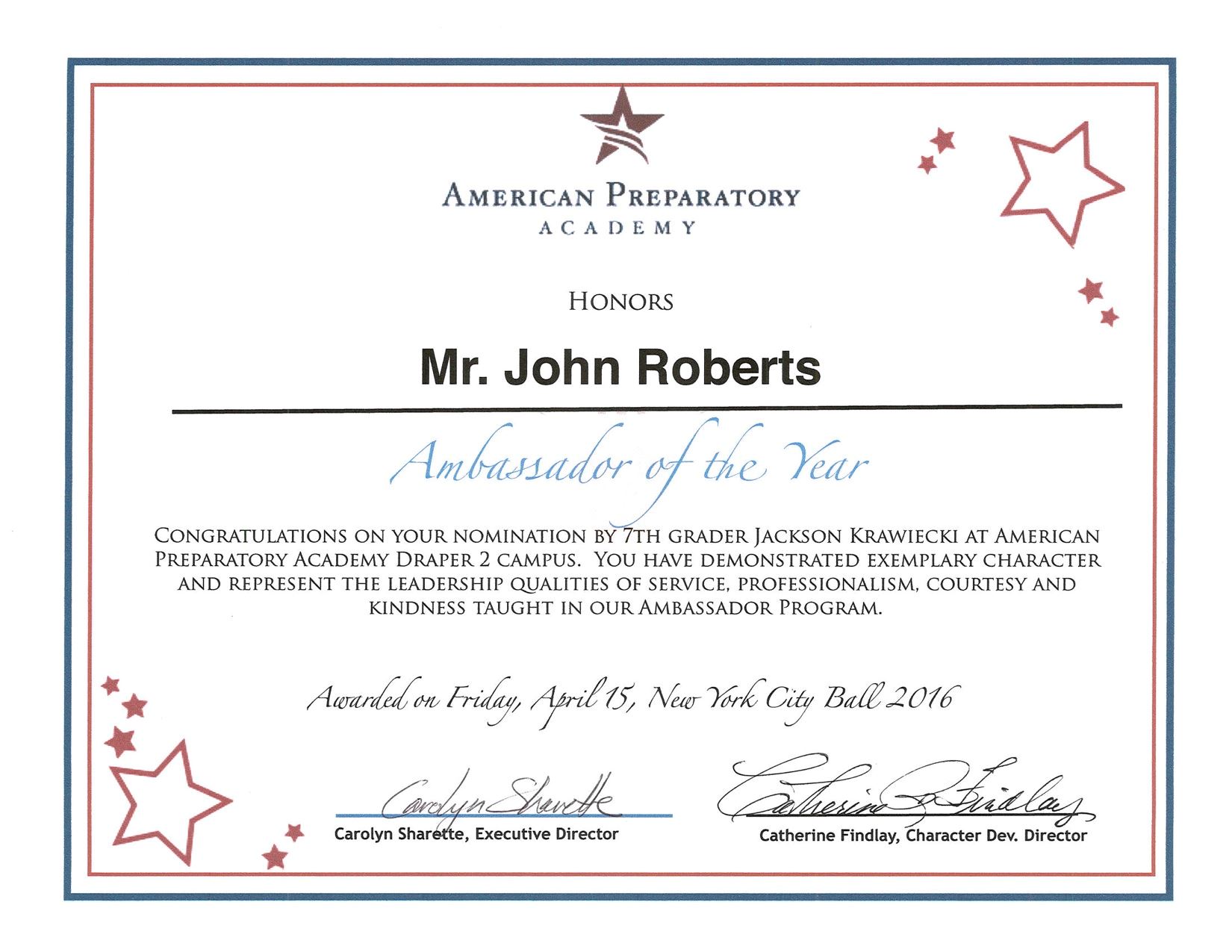